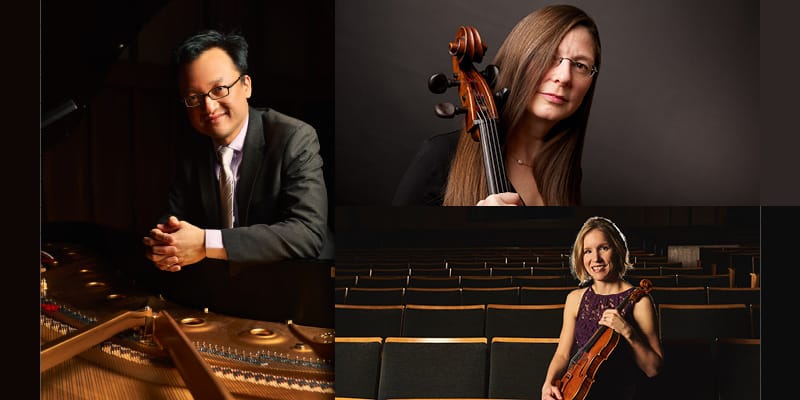 Tchaikovsky: Symphony No.6 in B minor

Born in Vietnam, pianist and Steinway Artist Andrew (Drew) Le has been hailed as “an impressive tour-de-force…a plenitude of poetic nuance” (New York Concert Review), and lauded for his “consummate piano virtuosity” (Goleta Valley Voice) and his “pistonlike precision” (Mountain Tradition). Drew was the first-prize winner of the 2004 Hilton Head International Piano Competition, and is currently serving as Associate Professor of Piano and Head of the Keyboard Area at Hope College in Holland, Michigan. He and his wife, violinist Jennifer Walvoord, are the Artistic Directors of the Chamber Music Festival of Saugatuck.

Drew is also the founder and director of Holland’s popular Brown Bag Concerts, a series designed to encourage and foster the accessibility of classical music to the general public. Drew studied piano performance at the Interlochen Arts Academy, the University of Michigan, and the Conservatoire Américain de Fontainebleau. Drew was also a C.V. Starr Doctoral Fellow at the Juilliard School, where he received his Doctor of Musical Arts degree in 2007. His teachers have included Hien Le, Vivian Kleinhuizen, Rich Ridenour, Victoria Mushkatkol, Arthur Greene, Philippe Bianconi, John Perry, and Jerome Lowenthal. Passionate about teaching, Drew’s doctoral document explored the pedagogical lineage of Jerome Lowenthal’s teachers, including William Kapell, Eduard Steuermann, and Alfred Cortot. Drew was appointed for three summers to the piano faculty of Interlochen Arts Camp’s All-State Program as an undergraduate teaching alongside tenured professors. Later, he was selected to be Jerome Lowenthal’s teaching assistant at The Juilliard School. Drew has also served on the faculty at the Gilmore Piano Camp, the Gilmore Foundation’s KeysFest, and at Friends Music Camp.

As a photographer, Drew has been capturing weddings, portraits, and events since 2007. Drew is a member of Sony Pro Imaging Support and is a past member of WPPI (Wedding and Portrait Photographers International). Exhibitions of his photographic work have been presented all across West Michigan. Drew released his debut recording on the Blue Griffin label in 2013, and received the 2016 Steinway & Sons Top Teacher Award. Drew resides in Holland with his wife and their two young children.

Jennifer Walvoord of Holland, Michigan graduated with her Doctor of Musical Arts degree from the University of Michigan in Ann Arbor, Michigan.  She has Master’s degrees in both violin performance and chamber music from the University of Michigan, and a Bachelor’s degree in violin performance from Hope College in Holland, Michigan.  Her former teachers include Andrew Jennings, Aaron Berofsky, and Mihai Craioveanu.

Jennifer holds the position of concertmaster with the West Michigan Symphony  and has been a member of the Grand Rapids Symphony and National Repertory Orchestra (Breckenridge, Colorado).  She has performed as soloist with the West Michigan Symphony, the Holland Symphony Orchestra and the Hope College Orchestra.  While at the University of Michigan, Jennifer performed electric violin on the Grammy Award-winning recording of William Bolcom’s Songs of Innocence and Experience conducted by Leonard Slatkin.

Jennifer is an active chamber musician, and she performs recitals regularly with her husband, pianist Dr. Andrew Le.  Jennifer and Andrew are the Artistic Directors of the Chamber Music Festival of Saugatuck.  She is also Director of Marketing for the Holland Symphony Orchestra.  Jennifer collaborated with her sister, Martha, on a recording called “American Perspectives” which was recently released on the Centaur Records Label.  Jennifer and Andrew live in Holland, MI with their son, Matthew and daughter, Katherine.

Alicia Eppinga has been a member of the Grand Rapids Symphony since 1989, was appointed Assistant Principal Cello in 1990, and Principal Cello in 2011. Ms. Eppinga was raised in Grand Haven, MI and attended the Interlochen Arts Academy from 1980 – 1983. She received her Bachelor of Music Performance degree at the Oberlin Conservatory of Music as a student of Richard Kapuscinski, where she was awarded the John Frazer Award in Cello Performance in 1987. She received her Master of Music degree at the Eastman School of Music with Steven Doane in 1989. She was a Fellowship student at the Tanglewood Music center in 1987 and 1989 where she worked with musicians such as YoYo Ma, Joel Krosnick, Seiji Ozawa and Leonard Bernstein.

Ms. Eppinga is a frequent performer in solo and chamber music concerts. She performs regularly in concerts at the GRAM and at the Chamber Music Festival of Saugatuck.  Alicia is a member of Ensemble Montage, a group of musicians dedicated to bringing unique and contemporary chamber music to West Michigan. She is also a founding member of Castalia, a piano quartet that focuses on performing music by women composers. Ms. Eppinga has appeared as a soloist with the Kent Philharmonia, Calvin Alumni Orchestra and on the Richard and Helen DeVos Classical Series with the Grand Rapids Symphony. She collaborated with composer Alexander Miller to create the “Madame Bovary” Concerto for Cello and Orchestra, which was premiered in September, 2013. Alicia is the cello teacher at Hope College. She lives in Ada with husband Jim and their children Leo and Iris.